An Introduction to Nashville Hot Chicken 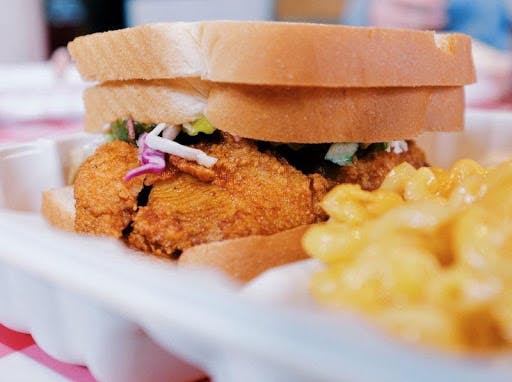 Nashville is widely known for its association with country music. Lately, Nashville has also become known as the capital for bachelorette parties in America. This is due to an increasingly heralded nightlife and bar scene.

And while these factors legitimately deserve national attention, it is not the only thing unique to Nashville that has garnered acclaim from people throughout the country — and even the world.

You might hear talk about it on your first trip to Nashville. And if you’re like most people, you probably don’t truly understand what it is. But Nashville hot chicken is a local staple of numerous restaurants and a point of pride for the city.

A downtown Nashville food tour is sure to offer up at least a few options for hot chicken, but it’s available in almost every corner of the city. Let’s look a little deeper into what it is and where you can find it.

Nobody is exactly sure what the concrete history is for Nashville hot chicken, but there are some generally accepted theories.

The first is that hot chicken has been around in African-American circles for generations. And while the current version of the dish didn’t enter the marketplace until the 1970s, it might have started long before that.

A favorite piece of local folklore relates to the family that owns a local hot chicken emporium, Prince’s Hot Chicken. Thorton Prince is the original owner of the restaurant and is often credited with introducing hot chicken to Nashville.

The story takes place in the 1930’s when Thorton was known as a bit of a ladies’ man. His girlfriend attempted to make use of his love for fried chicken in order to exact her revenge for his ways. She cooked it up with a pile of peppers and spices, hoping the fire that would build in his mouth would act as punishment.

Visit The Ville Tours to learn more about what Nashville has to offer!

There are numerous restaurants throughout the city that are going to have their own variation on the dish. A downtown Nashville food tour will most likely offer more than one version of the dish.

However, there will be some similarities no matter where you decide to give it a try.

The thigh, breast, and wing of the bird are most commonly used. It is either deep-fried or pan-fried once it has been coated in buttermilk and breaded.

The application of the spices will happen either before or after the frying, depending on where you go. Cayenne pepper and lard are combined and cooked until a thick sauce is formed. Other spices might be added, but these two ingredients are the base of the sauce.

The heat level will depend on how much of this sauce is used and can get to some pretty extreme levels. A new patron would be wise to use caution before ordering anything toward the hot end of the menu.

Additional spices and whether this sauce is applied before or after frying will depend on the restaurant. And many places will have house recipes that make the dish more their own.

Traditionally, the hot chicken is served on top of a piece of white bread.

As we said, hot chicken can be found in all corners of Nashville. But while it is ubiquitous, there are some places that are frequently included on best-of-the-city lists. Here are some of our favorites.

As we mentioned earlier, Prince’s is largely credited as the originator of Nashville hot chicken. And to this day, it’s seen as an eminent source of the delicious dish. And whether you visit their brick-and-mortar location on Nolensville Pike or find their food truck, you’re in for a treat.

You can find Bolton’s in both east Nashville as well as Antioch. And either way, you better be careful. Bolton’s chicken is known for its ability to melt plastic cutlery. Only those with extreme, heat-resistant palettes should attempt their extra hot option. The rest of us mortals stick to the mild (or even lite mild) and enjoy the delicious flavor.

It’s not uncommon to find a line stretching out of the building at Hattie B’s. This reputation for tasty food has allowed the restaurant to stretch into new markets — including Atlanta, Birmingham, and even Las Vegas. Visit one of their three locations in Nashville and see why people are willing to line up for a taste.

See What Nashville Has to Offer

A downtown food tour in Nashville will give you the chance to try a variety of options you’ll only find in Music City. Are you ready to have an experience you won’t forget?