The History of Printer’s Alley in Downtown Nashville 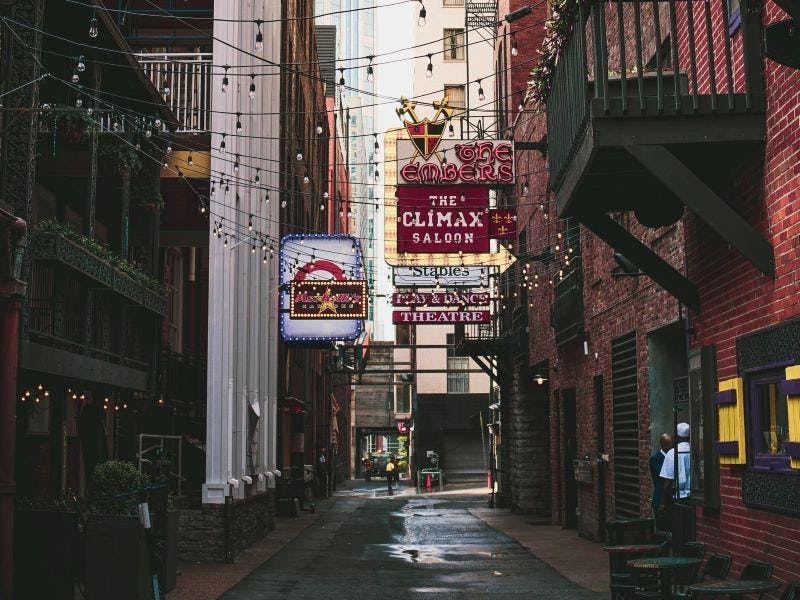 Nashville has a variety of great neighborhoods with interesting backstories. And while many people are drawn to the lights and fame associated with the lower Broadway district of downtown Nashville, there’s another scene that is equally as colorful yet not as widely known.

Printer’s Alley sits nestled halfway between 3rd and 4th avenue, stretching from Commerce Street all the way up to Union Street. Although, the majority of the establishments sit on the stretch between Church Street and Union Street.

A recent visitor might be confused as to how the alley got its name. This strip of bars, restaurants, and hotels has a colorful backstory that stretches back to the early 20th century.

As you might have guessed, Printer’s Alley gets its name from an association with the printing and publishing industry. There were ten print shops, two large newspapers, and thirteen publishers working out of the area in the early 1900’s.

And while the city would continue to grow and change over the coming decades, the connection with the printing and publishing industry would stay in place for a long time to come. There were more than 36 printing companies that called Nashville their home — many of which continued to operate out of Printer’s Alley.

This establishment of industry in the alley in the early 20th century set the tone for years to come. The men that worked in these businesses were also interested in local recreational activities. This led to what became known as the Men’s Quarter in Nashville.

The increased traffic from workers in the printing and publishing industry led to the beginning of what Printer’s Alley would eventually become — a location with a bustling nightlife.

Establishments began tailoring their services to these workers, along with lawyers, politicians, and judges.

Restaurants, saloons, and hotels began opening along 4th Avenue at the same time as the printing industry was getting started. These nighttime offerings became expanded as the area increased in traffic. Speakeasies, gambling halls, and clubs sprang up throughout the early 20th century.

Printer’s Alley was becoming known as the city’s lightlife headquarters, and it seemed like nothing could stop it — including Prohibition.

Visit The Ville Tours to learn more about walking tours in downtown Nashville!

Prohibition’s nationwide ban on alcohol sales and consumption didn’t start until 1920, but the sale of liquor for consumption in bars and restaurants became outlawed in Nashville in 1909.

That didn’t stop the nightlife that catered mostly to men — particularly men in positions of power.

The city overlooked Printer’s Alley when it came to alcohol sales and consumption.

Hilary Howse — Nashville mayor from 1909 to 1913, and again from 1923 to 1938 — was not a fan of Prohibition. He actively protected the area and was even quoted by news reporters as saying of Printer’s Alley bars, “Protect them? Better than that, I patronize them.”

Prohibition was repealed in Nashville in 1939, but the sale of liquor for on-premises consumption was still illegal. New practices such as the “Mixing Bar” method aimed to get around this law.

Patrons would bring their own bottles of liquor in brown bags to an establishment, where the bartender would mix them a drink. The bottles were kept behind the counter with the patron’s name written on the front.

This practice continued until 1968 when the law was finally repealed.

The Mayor of Printer’s Alley

There were many notable and famous establishments over the years, but one enduring figure remains prominent. David Schullman — also known as “Skull” — was dubbed the Mayor of Printer’s Alley in a resolution passed by the Nashville city council.

He owned the only exotic dance club that featured live music. But this was converted to a country music bar in the 1900’s and featured many prominent musicians.

Skull was murdered one night in 1998 as he worked alone in his bar. Neighboring establishment, Bourbon Street Blues Boogie Bar rented it for storage space for a little while, but stories of Skull’s ghost scared away anybody in search of stored items.

Skull’s Rainbow Room opened back to the public in 2015 and kept mementos from the previous establishment as a connection to the past.

Printer’s Alley continues to be a great place to visit for visitors and locals alike. There are a wide variety of establishments to visit, plenty of places to stay, and a unique atmosphere.

There are a handful of historic establishments that have been around for years, as well as some new offerings that provide great opportunities for food and drinks.

Printer’s Alley remains a great place to go for a night out, or even a walking tour of downtown Nashville, TN. No matter what you’re looking for, you’re sure to find it in Printer’s Alley.